Ready, set, explore! Behind the scenes at Explore

GemLife has always led the way in providing the finest over-50s resort living. In fact, providing parking for residents’ caravans and motorhomes was one of the original things that made GemLife stand out from the rest. Countless homeowners moved in, bringing their motorhome or caravan with them. But, in the words of Matthew McConaughey, ‘just because you can… doesn’t always mean you should’.

Standing in front of a carpark full of motorhomes and caravans, GemLife Director & CEO, Adrian Puljich, found himself wondering how often these capital-intensive, high-value, assets were actually being used.

The answer, as it turned out after a resident survey, was only occasionally – and for some owners, just once a year. He wondered whether a fleet of GemLife ‘timeshare’ motorhomes that residents could hire would give residents what they really wanted – the freedom to take a road trip whenever they wanted – but without the corresponding capital outlay and ongoing costs of registration, servicing and maintenance.

When Adrian spoke to GemLife’s creative agency, Theola, about the Explore by GemLife concept, it seemed so simple that they wondered why no one else had thought of it!

Behind the scenes of Explore
Tasked with producing a campaign to demonstrate the benefits of Explore by GemLife to both current and future residents, the Theola team felt the idea deserved its own identity, almost a whole new, more ‘mobile’ GemLife.

The premium Jayco Conquest DX motorhomes on order were upgraded to include all the modcons. But they still looked like ‘your ordinary average motorhome’.

Each GemLife Explorer was the very embodiment of the spirit of adventure – they needed to look the part with their own personality and identity.

The agency commissioned an illustrator, Owen Gatley, to capture the diversity and beauty of Australia’s natural environment and create scenes to wrap the GemLife Explorers motorhomes (see page 10).

The Explore commercial shoot
The first Explore motorhome was wrapped in the Daintree Rainforest illustration and loaned to Theola for the Explore by GemLife launch shoot to take place on Queensland’s Sunshine Coast.

Driving the Explore motorhome, named Bolwarra, to ‘day one’ of the Explore shoot at GemLife Maroochy Quays was an experience! Its design is so eye-catching that whenever the agency team pulled up at traffic lights, motorists would be craning their necks to get a closer look!

The crew set up in one of the display homes on GemLife Boulevard, and Ron and Jane, our acting talent, rehearsed their lines while the crew got ready to shoot the first two of the Explore teaser commercials.

Day two saw the film crew travelling to the Sunshine Coast hinterland to a picturesque lakeside spot at Maleny Lakeside Cottages opposite a dairy for the next two teaser scenes. This was the crew’s first chance to take the motorhome out on the road and see how easy it is to set up in a camping area (they confirmed it was a cinch!). Most things are automated, like the electric alfresco awning that rolls out in no time at all, so setting up your ‘home away from home’ is easy.

On day three the crew wrapped up shooting the Explore teaser scenes outside of Kenilworth, at Booloumba Creek. Ron and Jane got to pretend to wake up in the middle of nowhere with the sunlight gently illuminating their motorhome bedroom (yes, the bed is super comfy!).

The Explore by GemLife commercial campaign will rollout online and on television networks later this month. 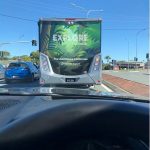 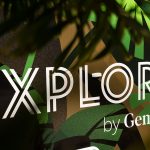 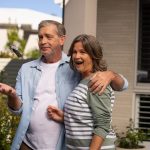 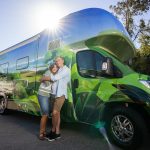 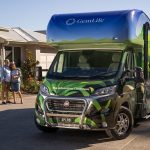 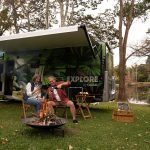 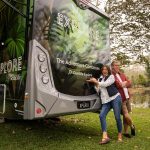 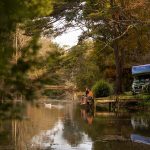 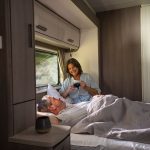 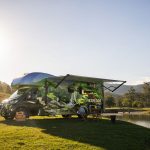 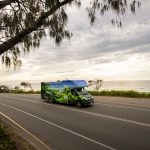 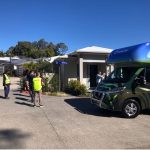 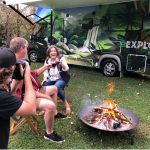 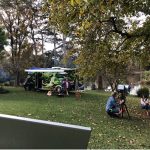