The lively, cheerful harmonies of the talented trio fronting The Andrews Sisters Tribute Show at GemLife Bribie Island last night had residents and guests tapping their toes and bopping to the beat at the resort’s country club.

GemLife Sales & Marketing Director Andrew Coulter said the show was a huge success with guests enjoying the skilled vocal harmonising of the singers and the dynamic band.

“We had a terrific turnout. It was a very entertaining, professional show that had the crowd up and dancing,” he said.

A prospective resident commented that the event also provided a great opportunity to quiz current residents about the GemLife Bribie lifestyle, in addition to experiencing a wonderful musical performance.

The original Andrews Sisters were the most successful U.S. female vocal group of the first half of the twentieth century, rising to popularity during the second world war period due to their happy, uplifting swing and boogie-woogie era music.

The prolific trio – LaVerne, Maxine and Patty Andrews – averaged eight singles in the charts every year between 1938 and 1951, an impressive output by any standards. Their cheery, “close-harmony” style and intricate yet seemingly effortless vocal arrangements reflected the swing band sounds that were at the height of their popularity during the group’s heyday.

Today, the original trio remains closely identified with wartime tunes and is often remembered for wearing military uniforms, an iconic look that the tribute show incorporates into its act. The Andrews Sisters were active in patriotic duty, providing wartime entertainment and volunteering by singing, dancing and signing autographs for the troops. This included an eight-week tour performing for thousands of servicemen. Their popular optimistic songs helped lighten the mood during the war.

The Andrews Sisters Tribute Show performed all the group’s best-loved hits, including Boogie-Woogie Bugle Boy, Rum and Coca-Cola and Don’t Sit Under The Apple Tree. 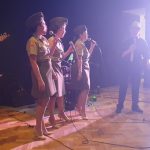 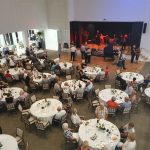 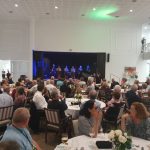 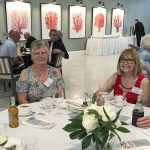 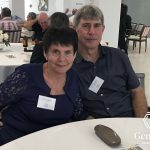 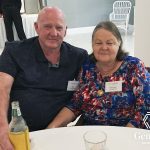 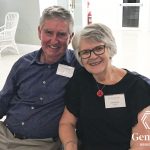