The Highfields community was right behind her, from the resort’s hairdresser Ky to residents putting on a celebratory morning tea, supporting her with donations, or paying for the privilege of cutting off sections of her hair before the big shave. 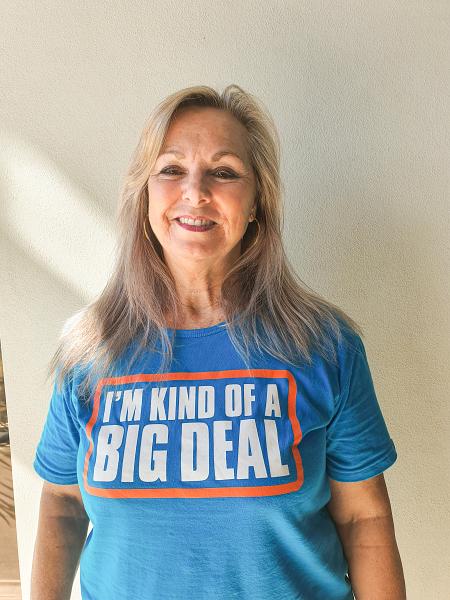 Cheryl raised a whopping $5000 for the Leukaemia Foundation which helps families doing it tough through blood cancer.

“The reason I got behind the World’s Greatest Shave is because I lost two family members to cancer – one to bowel cancer and the other to prostate cancer,” Cheryl said.

“Over the years I have met so many people who have passed away from this ravaging disease, so I thought with the help of others I wanted to raise enough money to make a difference, “Our son did it two years ago and raised $2,001.65, so that’s where I set the bar, and thanks to people’s mind-boggling generosity, I was able to keep raising the bar.”

Cheryl, who admits to being particular about her hair, said she had wanted to do the challenge for many years and felt proud about finally taking the plunge. “Rick (Cheryl’s husband) came around to the idea after a couple of days and was the first one to do a cut. He is behind me all the way now,” she said. Proudly sporting her new number two buzz cut, Cheryl has let go of her hair fussiness.

“I’ve been one of those people who says no to putting the roof of the convertible down as it mucks up my hair … well, look out now, because all you will see is my flying scarf behind me!” GemLife Director and CEO Adrian Puljich said Cheryl had done an amazing job.

“Cheryl is a special person and I’m proud GemLife has been able to contribute to her fundraising target for such a worthy cause,” he said.