On ANZAC Day, we come together as a community to honour the sacrifice of our fallen and pay respects to all the service men and women who have protected our country to this very day. We pledge our thanks to you and your ongoing commitment to the safety of this great nation. We take a moment to reflect upon WWII fortifications of Bribie Island and their important history.

Like much of Australia’s eastern coast, Bribie Island has seen its fair share of involvement within the world conflicts. The Bribie Island WWII Fortifications are a stark reminder of times gone by and the significant role the area played in defending Australia’s shores.

Located in quiet areas across the stretch of Ocean and Woorim Beach, the Bribie Island WWII Fortifications were built between 1939 and 1943 as part of a system of defence overlooking southeast Queensland. These fortifications provided artillery training for Australian soldiers for overseas service, in addition to significant involvement in naval defences across various sites on the Moreton Bay Islands.

Six months prior to the outbreak of the war, a fort that contained two 6” Mark XI guns along with a Battery Observation Post, were placed at north Bribie in addition to a soldier barracks at Caloundra. The batteries soon extended to a second fortification, that would initially be considered temporary.

During a much needed upgrade to Bribie’s defences, a major fortification was erected, known as Fort Bribie. Fort Bribie was placed on strategic grounds owing to its more advantageous position to the shipping channel as opposed to placement at Caloundra. The concrete structures of Fort Bribie were fully operational by early 1942 and camouflaged in 1943.

After Japan’s entry into the war in early December 1941, reinforcements were sent to Fort Bribie and Fort Cowan Cowan in order to strengthen their existing defences. After the onslaught of the Pacific War, the Americans began supplying large numbers of men and material. Upgrading the coastal defences, new forts were constructed at Skirmish Point on the southern end of Bribie Island. Training was then carried out between Australian and American troops, including the use of tanks due to conditions being likened to that of Buna, Papua New Guinea where Japanese beachheads were located.

In June of 1942, it was requested that Moreton Bay be developed as a naval operating base. This resulted in the construction of several buildings on both the mainland and islands. Loop controlled minefields were in operation off the coast of Fort Bribie, in addition to a system of submerged magnetic cables that would sense the path of a vessel passing by. These Indicator Loops operated between Skirmish Point and Moreton Island.

With the Japanese threat receding in the latter years of the war, instructions were given to scale down all coastal defences. Any building material that could be disassembled or reused elsewhere was dismantled and exported off the island. Some barracks were cut from their stumps and sold as housing. The reinforced concrete structures however, remain to this day. In the 1970s, Skirmish Point Battery gradually fell to the ocean and was removed, with only the northern Fortress Observation Point remaining.

The ruins of the Bribie Island Fortifications provide a confronting memory of our part in WWII and an enduring reminder of our past. We will never forget the sacrifice of the brave men and women who defended us here.

If you would like to visit the Fortifications, a 1.25km walk links the Ocean Beach camping ground with Fort Bribie. You can also reach the carpark via a 4×4 using an inland road from White Patch (22km).

*All historical images provided are courtesy of the Queensland Government Heritage Register. 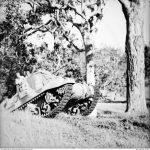 NSW or QLD, 1942. A General Grant M3 medium tank of 2/4th Armoured Regiment in the bush somewhere between Wee Waa and Murgon. These tanks are being driven to QLD for use in combined operations training with US troops near Caboolture and on Bribie Island. 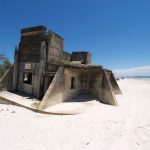 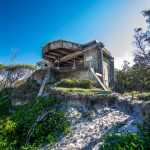 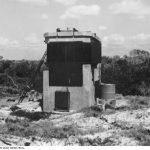 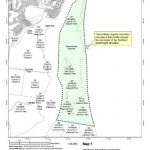 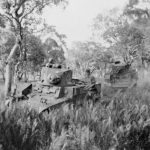 Bribie Island, 1942. 2/4th Armoured Regiment in combined operations training with US troops. This Stuart M3A1 tank is being tested in conditions thought to be similar to those at Buna, where the tank will be used if suitable.