Creating jewellery boxes carved out of timber and displaying intricate inlay artistry, featuring huts built in the high country of Victoria, is an art that GemLife Highfields’ resident Bob Commens has mastered.

The modest woodworker spends weeks on each project and says it is a labour of love more than a money-raising venture for him.

Asked how he goes about creating each unique design atop his jewellery boxes, Bob said it takes a lot of time and effort but is also very satisfying.

“It’s hard to describe how it is done, but inlays look like a painting but aren’t. I start with taking a photo of a hut and painstakingly use that as my guide to reproduce it on the top of my timber jewellery boxes,” said Bob.

The final product has been much admired during the past ten years since Bob began making them in his home workshop, with many of the unusual works of art selling from between $50 and $150.

It is also a creative tradition that has continued since Bob and his wife Leath moved into their GemLife Highfields home nearly three years ago.

Bob brought with him a huge collection of tools which he donated to the GemLife residents’ workshop.

“I offered my tools and woodworking equipment to GemLife and they gladly accepted,” said Bob, who is now the workshop’s coordinator.

A lathe, thicknesser, dust collector and grinder plus a few smaller items were provided by GemLife to set up the workshop, with Bob providing the rest of the tools as well as his knowhow and expertise in working with timber.

Originally, the residents’ workshop was known as the men’s workshop, but it was changed to make it more welcoming for women who enjoy working with wood.

“A workshop like this was traditionally considered a man’s domain, but in this day and age we don’t differentiate between men and women,” said Bob who is keen to see more women coming into the workshop.

He said anyone who wants to join the workshop is taken through an induction course and shown how to use all the equipment safely. Although, some may prefer to let someone else work the equipment for them.

One enthusiastic starter, fellow resident Esme Gallatly pleasantly surprised Bob and many of her friends and neighbours by creating several outstanding items including a bench seat for her front porch and a rolling pin, in her first five weeks of attending the workshop.

“Esme hadn’t done any woodwork at all and wanted to learn, so we drew out a bit of a plan for what she wanted to make,’ said Bob.

For anyone interested in woodworking, the workshop is fully equipped with tools as well as with people who have a wide range of skills and can help others where required.

“I think some people doubt their own woodworking talents, but it’s important to give it a try first before deciding not to do it. That’s how you get better at anything. Practice makes perfect!”

Bob stressed that the workshop is more than just a place in which to work on carpentry projects.

“It gives people an interest and provides them with a chance to not only learn from others but also to socialise and make new friends.”

There is one thing for sure … like Bob’s amazing inlay jewellery boxes, the end-result can bring a huge smile and feeling of self-satisfaction and pride. 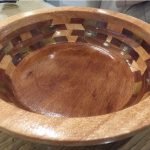 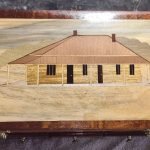 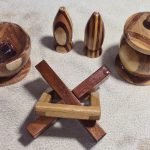 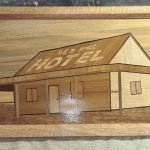 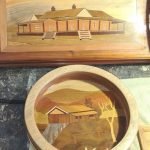 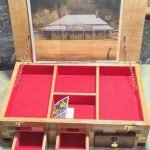