Described as the car of presidents, gangsters, and the silver-screen movie stars of yesteryear, the 1935 Lincoln Model K Lebaron coupe is an object of motoring beauty, and one that Woodend resident Bob Jones is not ready to let go of yet.

The former motor mechanic, now fully retired, moved to GemLife Woodend with wife Margaret in February, along with their greyhound rescue-dog Charlotte and, of course, their head-turning royal blue three-ton vintage Lincoln.

The incredibly rare car – named after revered United States president, Abraham Lincoln – is most likely the world’s only remaining right-hand drive model, with just four or five built in 1935.

“I love the beauty of old cars. I just love them. Today they all look the same,” said Bob.

About 30 years ago, Bob’s long-time love of old cars led him to look over a 1926 Rolls Royce, for sale by nearby neighbour and well-known Victorian motoring historian Harold Paynting. It turns out buying vintage cars is dangerous because he left the garage with the Rolls Royce AND the Lincoln, thanks to a well-timed nudge by his son Andrew who spied the stellar coupe in the corner.

“When my son saw the blue coupe in the back of the garage, he said ‘You can’t leave that behind dad!’. So we got the Lincoln too!”, said Bob.

The car is in completely original condition and, other than being repainted 40 years ago in the original colour scheme, has never been restored.  The authenticity and provenance of the coupe has been verified by the US Lincoln Owners’ Club, of which Bob is a member.

“It’s a very powerful car with a V-12 motor and can go up to 120 miles per hour [193 kilometres per hour]. Not that I’ve driven it that fast! It’s smooth to drive and I’ve driven it a lot, including New South Wales rallies and Adelaide every four years,” he added.

When brand new, during the Great Depression, the car was one of the most expensive – about US$4200, the likely reason for its limited production. The Lincoln features a ‘dickey seat’, an upholstered fold-away bench seat, for extra passengers and a roomy lockable side compartment which can store a couple of golf bags.

“It has no-aircon, no power steering and it’s a monster to park!” laughed Bob.
The Lincoln remains garaged most a lot of the time but gets a run for car club meets with the Macedon Ranges & District Motor Club, and vintage car shows.

For day-to-day driving, Bob and wife Margaret stick to their modern (and much easier to park!) Volkswagen. 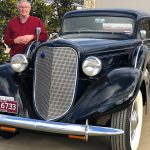 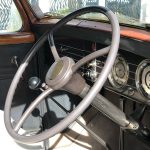 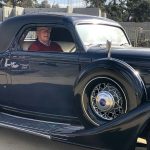 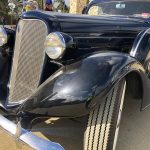